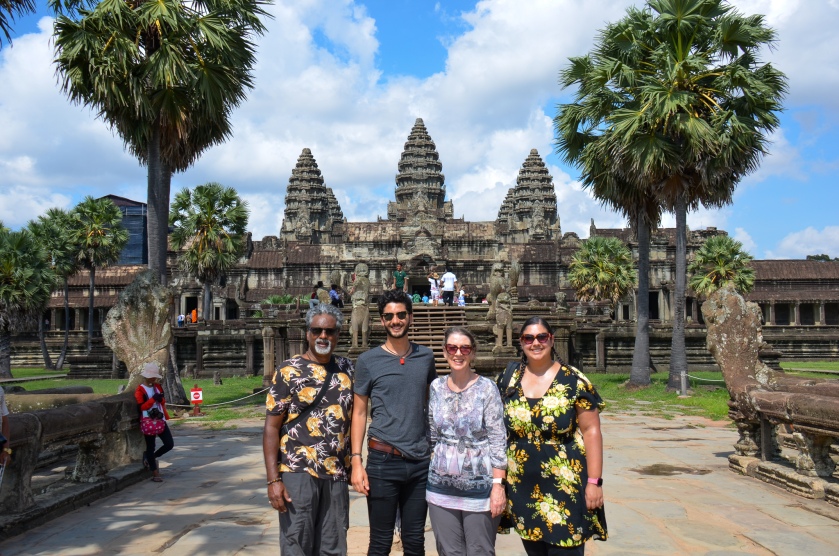 We visited Vietnam and Cambodia in June 2019 and although we had visited both countries, on separate occasions, we loved them so much that we wanted to bring our adult children here for a family adventure holiday before our trip to Malaysia.

Nisha, Basker and I departed from Auckland and arrived in Vietnam to tour for 6 days after which time we met Linga, who arrived from the UK to join us and continue on with the rest of the tour, another 6 days. At the end of our Vietnam/Cambodia tour we carried on to Malaysia to visit with extended family and attend a wedding… that is for another post…

So, the three of us were up and off to the airport early on the appointed day safely ensconced in an Ola cab… but the driver’s app was glitching. He started going in circles, it wouldn’t take him on the correct route. At 5am we found ourselves dumped on the side of the road with all our luggage, in the dark, wondering what to do. Luckily an Uber taxi was nearby and finally we were off. However, I somehow think this set the tone for our trip to Cambodia and Vietnam… wonderful excitement followed by some difficulty. Read on, dear reader.

We certainly had a jam packed itinerary and the pace was hectic because, as it turned out, we had scheduled a lot of attractions within a short timeframe. The days seemed to race by in a blur.

We arrived in Hanoi after an 11 hour flight to Kuala Lumpur then a connecting flight of 3½ hours to Hanoi, not too long for us because our home is so far away that we are used to long haul flights particularly when heading to Europe or USA.

As soon as we arrived we started our tour and visited many sights, I had a foot spa, and we bought souvenirs from a lacquer shop, a beautifully crafted tray with a traditional design. After the official tour for the day ended Nisha wanted to visit Train St so the guide was kind enough to take us there and it was the perfect photo op. Gosh, the place rattled when a train passed by so closely. Everyone scrambled, wonderful.

We continued walking in the evening to find a good restaurant and enjoyed lovely fresh minty Viet food. We loved the pretty Hoàn Kiếm Lake and wandered around this area soaking it all up. Then we went to the Water Puppet Show and were amazed to get wonderful seats in the front row. A double edged sword. The show was cute and whimsical… until it wasn’t. I was splashed with water and it went directly into my eye! Is it just me or do you tend to sink into a dark hole when you’re not sure of what it all means. I obsessed about getting pink eye for 24 hours! Nothing happened and I’m still alive and all is good. Second glitch.

Up and off by 5am because it was a long drive to Halong Bay and we had a boat to catch. We had previously been on this cruise but were thrilled to be taking our daughter this time and we’re glad that she loved it as much as we did. The cruise was stunning. Halong Bay is UNESCO World Heritage Site and popular travel destination and we enjoyed seeing the thousands of limestone karsts as we floated by.

Dinner on the boat was a huge amount of fun. The crew looked after us well, they held a hands-on cooking class making Vietnamese spring rolls, served us drinks, and presented amazing food decorated with fantastical garnishes. We slept well.

The next day on board was full of new experiences. The sunrise on the top deck at 5am while doing tai chi was beautiful. Later we wandered through a limestone cave and then followed along as others did some kayaking. The fishing village was fascinating.

After the cruise we headed back to Hanoi to stay for one night and in the evening Basker hired a rickshaw for us and we were cycled around Hanoi while enjoying the busy night atmosphere and lights.

A busy day touring significant places of interest in Saigon. We visited the Vietnam War Museum and discovered that here in NZ we manufactured the devastating agent orange chemical used in warfare. There were some tears. Interestingly, just a couple of weeks ago here at home, there was a news item about the chemical effect on factory workers at the Paritutu manufacturing facility. Also it was mentioned that the facility is now closed with no testing or remediation of any soil contamination planned. A sad testament.

We decided to give the tunnels a miss in favour of a boat tour on the Mekong Delta. It was very pleasant. We landed on Unicorn and Coconut islands, saw a coconut factory, snake whiskey, coconut candy, honey tea and sampled some local fruit such as rambutans. Next we were taken to a smaller river reminiscent of the Whau Creek where tiny boatwomen were to paddle us along the narrow canals. Picture this: us three big people on the banks of a creek looking down at a couple of tiny canoes wondering how to get in… and if we did, how would we balance long enough to sit down? Also, how were these tiny women going to cope?

These questions were full of doubt and anxiety. I was riveted to the spot and couldn’t move. Glitch three.

I have to give all the credit to Nisha. With all the elegance of a softly stepping dancer she managed to gently step into the canoe and lower herself to a plank seat without tipping. I was encouraged to follow suite and my visions of arms flapping, legs wobbling side to side followed by a ungraceful, floundering nose dive into the river all but melted away… I did it! Basker jumped in like a boss and we were paddling away.

Once I got in, I actually enjoyed it and I saw it as an innovative experience giving tourist some appreciation of the skillfulness of the people as they navigate the narrow waterways.

Nisha described it as an awful Disney ride, her words.

We took a puddle hopper to Cambodia with only 20 people on board. It was only a one hour flight but seemed to take forever to get to our hotel. We searched for Amok chicken before turning in for an early night.

The next day we met Linga at the airport mid morning and embarked on our days activities. We went directly to the floating village. The boat ride was etheric as it took us across vast tracts of water in the gloom and mistiness of the morning. I really loved it and it give me glimpse of such a different way of life. Amazing!

At night we visited Pub Street for dinner and we were surprised at how different it was compared to our previous visit, so much more busy. A thriving, bustling street full of restaurants, bars and shops, full of life and promising the odd bargain.

I missed the sunrise but the others were up at 4.00am to visit Angkor Wat. By all accounts it was beautiful. After we reunited for breakfast we all returned to Angkor Wat for the day. It was an amazingly surreal experience. We couldn’t believe that we were here, such a “pinch me” moment in time.

We spent the day walking, climbing steps, taking photos, touching ancient structures and all in 30 degree heat. Be sure to take lots of water, you will need it.

I would suggest a three day pass because it would have been nice to explore all the outer temples and buildings, there is so much to see… next time.

A full day visiting the mountain, waterfall, puja at the temple, river of the 1000 Lingas, and enjoying the outdoors. Lots of driving, walking and eating. Spectacular.

A quick 45 minute flight and we were in Phnom Penh. This was the hardest day.

We visited the Genocide Museum and the torture prison. It was terribly terribly sad and depressing and we spent the day in tears. We actually got to speak to a man who was a survivor and was on the grounds of the prison to promote his book. Was it only such a short time ago that such atrocities occurred? I remember hearing the news when I was at university in the 1970s and got to know the name Pol Pot. It was as abhorrent then as it still is now.

Horrible glitch four. However, it is good to remember, to make sure this is known, never forgotten.

We enjoyed the market and spent our last night shopping for souvenirs, then headed to the roof top bar for well deserved cocktails and cold beers.

In the morning- off to the airport and on to KL.

We came to Cambodia and Vietnam to see history and we left with the memory of beautiful people.

My heart goes out to Cambodian people. The rebuilding of the country from the ground up has been slow and careful but the positivity of the people is inspiring and makes me think that all will be well. We met friendly and engaging people here who welcomed us, a strange group of tourists.

Funny story… after 3 days on tour our guide wanted to know how it came to be that we were a group of 4 people travelling together, how did we know each other? We explained our individual origins and that we are a family. This endearingly demonstrated just how sweet the people are. Honestly, just ask.

I love it when someone asks about us, how did we met, what do we think, what is our religion. This is my opportunity to educate and inform.

My belief: love does not need to have labels, love has no colour, sex or age.

Thanks for visiting my blog. Ka kite anō.

This is a blog that aims to share beautiful recipes, crochet ideas, travel inspo, mosaic art… and more View All Posts

Buy me a coffee so I have the fuel I need to keep making great posts!